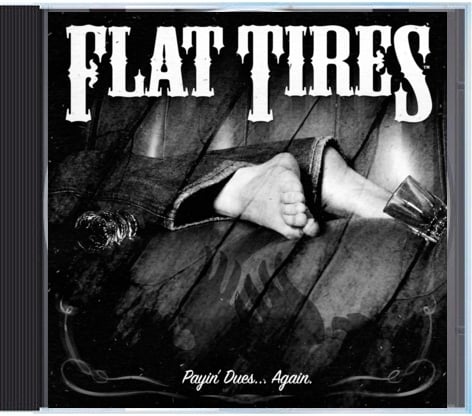 FLAT TIRES "PAYIN' DUES AGAIN" CD
REMASTERED AND SOUNDING BETTER THAN EVER!!
North Carolina's favorite hellbillies are back...again. This time they unleash a fury of ass-kicking, nitro honky tonk that turns the trailer upside down like a tornado spinning full of combat boots and concrete blocks! The self-titled first track, Payin' Dues...Again comes at you like an elbow in the nose as singer Clint Harrison force-feeds you a clairvoyant hellride into a night of drinking and partying knowing that the dues will be due in the morning. "I'm seeing black spots and little pink dots and my knees are a shakin' - I'm pretty damned sure I'm payin' my dues again," Harrison pleads. This song is just the introduction to the Flat Tires electrocution style of honky tonk and segways into their best sounding album to date! PBR is a love song to the devil's liquid - alcohol. Guitarist Bryon Smallwood chops away with confidence and adds a heavy, yet controlled sound to the Flat Tire's sound. He is a great addition to the band. Payin' Dues...Again continues it's nasty habits, this time it's in the bedroom where break-up sex never sounded so good...or dirty when Scream bleeds through the speakers. The disc rocks on with my favorite ditty, Bourbon Whisky. Here drummer Phil Keller and bassist Scott Cline drive this groove-laden rapture as Harrison explains the positive numbing affects of whiskey. It's a good ol' Flat Tires, goddamned good time. The Flat Tires, who now think of Charlotte as their hometown, are the region's ONLY hellbilly band worth picking your ass up off the sofa and getting out to see them live. Talk about a good time; moshing, flying beer and a shower of empty cans being tossed at the band makes their live show a visual overload and physical beating, even if you stand in the back and don't throw one can. Harrison has the way of sucking the life out of you. If Satan were to front a band, it would be this one......wait a minute. Back to the disc, more honky TANK ensues with Let the Devil Out and On the Loose, two more hardcore classics. The infamous Hypocrite pounds out next, as a big fuck you to all of those who have crossed the Tires. Hypocrite is the Holy Grail of this album. It say's it all about their sound, their attitudes and their straightforward style. "You are a real true friend? Then you're full of shit, cause your best friend's girlfriend sucked your dick," Harrison preaches. This song makes my spine cringe for its hell-fueled anger. It's almost like they are coming to get you and I LOVE IT!