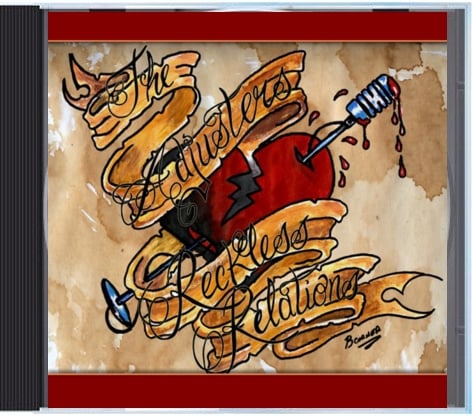 THE ADJUSTERS "RECKLESS RELATIONS" CD
From the filthy smoke-filled pubs of London England come these bastard sons of Johnny Thunders and crew! Somewhere near the sound of the HEARTBREAKERS beating the snot out of the BOYS-OR MAYBE GUNS AND ROSES. This is great ROCK N' ROLL! Complete with huge riffs, great hooks, and LOTS of hot R N' R piano action! Awesome guitar work and sound too. Close cousins to their juvenile delinquent American counter parts the FAST BOYS. These young uns' rip the rock a new arsehole. As they say across the pond. With lyrics like "you're a high-class hooker, just like your mother" and a fuck-all attitude, these boys are sure to be a top favorite of real ROCK N' ROLLERS everywhere! Get it now before they are all dead and gone! Zodiac tortures MILF'S while listening to this baby and chugging pints!!!

Continuing my series of posts on the great Zodiac Killer Records, I've got a real gem here dating back to 2009 (can you believe that's already five years ago?!). The Adjusters were a young band out of Wigan, U.K. that were totally up my alley. Sadly, I missed the boat on these guys while they were still around (they split two years ago). But the good news is that it's never too late to discover awesome music. The Adjusters' debut album Reckless Relations is one of the best things that Zodiac Killer has ever released, and that's really saying something! These kids were all 20-21 years old and totally got it - demonstrating that trashy rock n' roll and Johnny Thunders worship will never go out of style. And it wasn't just that they played the right kind of music. It was that they freaking rocked! Opening track "Drinkin' Red Wine" is as great of a Heartbreakers/Joneses rip as you'll ever hear, and the band injects plenty of its own attitude into the mix (sample lyric: "You're a high class hooker/Just like your mother"). And there's no let-up from there. Led by charismatic vocalist Ash Corner, The Adjusters kinda came off like a younger, snottier Humpers. Reckless Relations is a non-stop romp of sleazy punk rock n' roll with lyrics addressing all the finer things in life: chasing women, getting trashed, and chasing more women. Echoes of the Dead Boys, Stones, and New York Dolls abound, but The Adjusters definitely put their own spin on a classic sound. Whether you're talking about sonic fireballs like "Can't See" or the good old glammy rock n' roll of "Kickin' Down The Doors", Reckless Relations is chock full of killer tunes that will hit the spot whether you're looking to raise hell or just feel like dancing. It's still available from Zodiac Killer on CD, and you can buy it off iTunes or Amazon as well. Definitely one of the better '77 punk rock n' roll albums of the last 5-10 years - go get it!