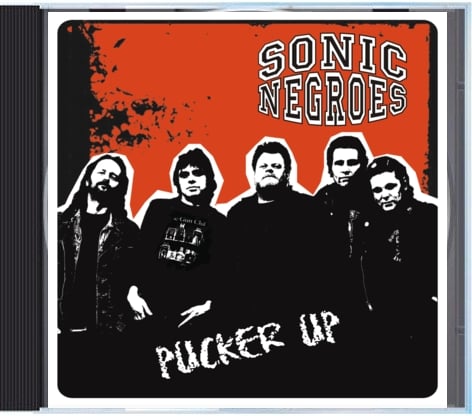 SONIC NEGROES "PUCKER UP " CD
A generation after Iggy and the Stooges first laid waste to America's youth, a new crop of disenfranchised garage bands have made their stand about 4100 miles east of Detroit.Stockholm, Sweden, is the epicenter for bands like Hellacopters, Backyard Babies and The Hives. Like countrymen, the Sonic Negroes have cut a path of destruction that has crossed Europe, the Atlantic, and now the US. I remember their WHITE TRASH'09 US Tour being more like the Taking of Normandy than a Rock'n'Roll tour. They drove coast to coast in a shitty white van, playing 25 shows in 32 days… sharing the stage with American scene vets like Electric Frankenstein and The Hitchhikers. From NY to LA to Cleveland and Seattle, the Negroes have left inked and pierced bodies at the foot of the stage… all willing sacrifies to these Swedish Gods of Rock. Get ready to do it all over again. The Sonic Negroes are back!!! PUCKER UP, their 2nd full length release is a seedy excursion down the back allies of Swedish Garage Punk.